Statement in Response to Anti-Whitburn Mailer

When Progressive San Diego’s board of directors considers whether to endorse a candidate, the candidate’s ability to wage a clean campaign and spread a positive message while civilly debating his or her opponent is the subject of much discussion. Because PSD believes that candidates must have a positive agenda and be willing to stand up for progressive principles rather than simply opposing an opponent’s nonprogressive positions, we also believe that campaign strategies must focus on spreading that positive message and be limited to responding to attacks on a candidate’s character and integrity. Attack ads, no matter how effective they may be, have absolutely no place–none whatsoever–in a progressive candidate’s campaign. There is nothing progressive about cutting down one candidate so that another will stand out. Progressives have a strong message to spread, but personal attacks and other mud-slinging seriously undermine that message and fuel speculation about the credibility of those who benefit from such tactics.

In the strongest possible terms, Progressive San Diego condemns the recent “hit piece” against City Council District 3 candidate Stephen Whitburn. We do so not because Stephen, along with Todd Gloria, has earned our endorsement. Our condemnation stems from our deep commitment to promoting clean, honest, positive debate among all candidates for public office and keeping gutter politics out of elections. People certainly have the right to express their views about political candidates. But PSD also has the right to call out anyone who tries to stain the respectable campaigns that its endorsees try to run.

This morning PSD spoke to both candidates about the attack on Stephen. Todd unequivocally denied having anything to do with the attack, and PSD takes him at his word. Both candidates rejected attack ads as illegitimate campaign tactics.

What makes the attack especially disturbing is the false light that it casts upon Stephen’s campaign contributors. While PSD is not familiar with every contributor listed in the ad, the overwhelming majority of them are people with impeccable progressive credentials, people who have dedicated themselves to putting public interest over self-interest and are anything but back-room dealers. For the attack’s sponsor to suggest otherwise not only tempts candidates to respond by stepping out onto the slippery slope of gutter politics, but it leaves an unfair and unacceptable trail of collateral damage. It should be obvious to every good progressive candidate that allowing committed members of the progressive community to be sacrificed for political gain is intolerable.

For these reasons, PSD calls on Todd to immediately and publicly denounce the recent attack ad against Stephen and other members of the progressive community; and further calls upon both Stephen and Todd, along with their surrogates and supporters, to refrain from similar attacks. In the final days of this election, each campaign should focus on affirmatively demonstrating that its candidate is the best man to represent the residents of District 3. 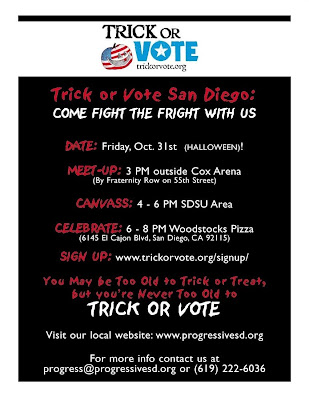 Join Progressive San Diego, Common Cause, League of Women Voters, The N3TWORK and others to GOTV around SDSU and enjoy some free food, prizes, goody bags, giveaways, fun and more.
Posted by Tommie Watson at 9:31 AM No comments:

Rumors about the shift in Republican spending from the 7th to the 1st may be due to the rumor that Mrs. Thalimier isn't too keen on dumping truckloads of her money toward her man this time.
Posted by Socrates in Love at 1:39 PM 2 comments:

I was in El Cajon yesterday and heard these hard core Chaldean Bush supporters going for Obama. As expected, it's about the economy and basic governance.
Posted by Socrates in Love at 9:08 AM 1 comment: