Two Cathedrals: Building a base is not a vice.

This boils down to the collision of principle vs pragmatism: Whether aspiring to the supposed ideal of post-partisan governance trumps the pragmatism of trying to actually enact beneficial policy. The trick is, the policy is the principle. It can be easy to lose sight of the actual point of politics, but ultimately the goal is to improve people’s lives. And the mechanism is policy. Everything else is the sausage-making. Aspire to as much righteousness as you want in the process of making that sausage, but at the end of the day all that matters is what gets made.

Here is the post.
Posted by Franklin at 5:40 PM No comments:

CityBeat has the story here.
Posted by Anonymous at 8:04 PM No comments:

SAN DIEGO – (Thursday, June 30, 2011) – The Republican ballot measure to leave city workers without Social Security or any other retirement safety net includes a maneuver that Mayor Sanders claimed was illegal just a few months ago in order to achieve be

According to the ballot measure’s supporters, the section of the proposition requiring the city to freeze pensionable pay for 5 years accounts for up to 87 % (or $1.1 billion) of the savings heralded by supporters. It is against California state law to impose a pay freeze for that long without bargaining in good faith with employees first.

“They’re counting chicks that will never hatch under state law,” said Lorena Gonzalez, the San Diego Labor Council’s Secretary-Treasurer. “This proposition leave workers without Social Security or any retirement safety net and assures the City will find itself back in expensive courtroom battles like in the Mike Aguirre days. Those are steep prices to pay for what appears to be minimal savings compared to the status quo.”

Other reasons why this ballot measure is BAD for San Diego:

BAD FOR THE LONG TERM: Additionally, it appears to be a better deal for the city to keep the employees in the pension system. In year 27 of the lower scenario, the costs of the 401-K begin to outpace the savings from reduced payments to the pension system. This begs the question of why the Republican campaign cut off the chart at year 27 instead of going further, because it is clear that this measure has the potential to end up costing more in the long run.

BAD FOR THE SHORT TERM: The supporters are admitting that the short-term costs outweigh the savings even if the measure is found to be legal. The San Diego City Employees Retirement System said that moving to a 401-K will cost the City $94 million over the first six years because money for new employees will not regularly be directed to the retirement system. That’s the last thing San Diego needs as police, fire and other city services have been cut during this recession.

TAKING CREDIT FOR WHAT’S ALREADY HAPPENED: The Republican campaign is taking credit for the pick-up savings, even though that has already been eliminated through collective bargaining between the City and its employees. 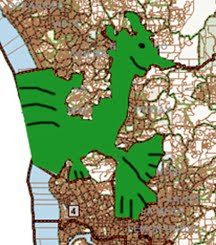 If a UT editorial can see the problem, why can't the Board of Supervisors? Maybe they can but won't do anything until challenged.

We don’t see these decisions as driven by racism. Instead, they’re fueled by politicians’ desire for self-preservation. That distinction, however, hardly insulates the board from a Voting Rights Act challenge. Such a challenge now seems inevitable – and welcome.
Posted by Franklin at 7:20 AM No comments:

I, for one, am shocked, shocked at such shenanigans. It is here on this YouTube clip.
Posted by Franklin at 5:42 PM 1 comment:

SD CityBeat: Murder at the courthouse!

To be fair, Durfee’s Republican counterpart, Tony Krvaric, has the same policy: no support for Republicans who dare to endorse Democrats, whether or not the office is partisan. Durfee and Krvaric both are political hacks who’d fit in nicely as party operatives in some fascist foreign regime. They make things worse, not better. America should aspire to something loftier than these two knuckleheads.

SDUT: No Mayor Kehoe: State senator decides not to run

“We gave it a lot of thought, talked to friends and supporters ... and I came to the conclusion that I am not going to run for mayor in 2012. That’s it. The whole story,” the San Diego Democrat said in a brief interview Tuesday night as budget votes were underway.

The UT has the story here.
Posted by Anonymous at 6:58 AM 1 comment:

About Those Democratic Endorsements of Non-Democrats

As I said previously, Bonnie Dumanis (and to a lesser extent, Nathan Fletcher) is the establishment candidate for mayor.  So its not at all surprising that members of the San Diego political establishment would give her money and support.  Lynne Schenk and Murray Galinson fall into that establishment category, and even with Bonnie Dumanis being a Republican, they're going to support her.

Additionally, there is a bit going on behind the scenes.  Specifically, it appears that Kehoe is staying out of the Mayor's race (for now), so the sole remaining Democrat is Bob Filner.  The Congressman is a tireless campaigner, a brilliant mind, someone who cares deeply about his constituents, and is actually passionate about his job.  If Filner becomes mayor, he's going to work his ass off.  As a progressive, I'm pretty pumped at the idea of Filner, also a progressive, being mayor.

That said, Filner has a reputation of being prickly.  Or, in less polite terms, Filner has a reputation of being an asshole, particularly by his enemies.  One particular enemy is Juan Vargas, who ran against Filner in two epic bloodbaths (and one completely disappointing campaign) that left both men scarred for life.*  Galinson and Schenk are current and former Vargas supporters, and so its not at all surprising that they are backing Dumanis.

I have no idea if Sessom comes from the Vargas camp or not, but I wouldn't be surprised if she was.  As far as her line about Jess Durfee, I find it somewhat surprising that a mayor who has asked for and received the Democratic Party endorsement time and time again doesn't know who the Democratic Party Chair is.  In this respect, Lucas over at Two Cathedrals is right.

Nonetheless, for the Democratic Party insiders who haven't been on the lines of the Filner-Vargas war, Bob Filner is their guy.  Note that both Kehoe and Frye both slightly backed away from running for mayor when they heard Bob was in.  They didn't do that out of fear, they did it out of respect.  And not only will the Dem insiders back up Durfee's statement that the endorsement of non-Dems in this race will be punished, they'll cheer him all the way.

And this is a big, big problem for Dumanis.  She's gay, she's pro-union, not fiscally conservative, and completely out of touch with the Republican Party.  With the DeMaio in the race, Dumanis' only hope is gather enough support from Democrats and independents.  But if Filner is in the race, and is strongly supported by Democrats, Dumanis is toast. She knows that, Bob knows that, and that's why the endorsement thing is a big issue.

*I'm not even remotely joking about this, and no I can't tell you how I know.
Posted by Phat Jim at 4:28 PM No comments:

NewsFlash: The election is 16 months away...

So with the election only 16 months away we already have a winner in the San Diego Mayor's race. Even though there have been no mailers, no commercials, no precient walks, no debates, no anything. The situation is so dire that only Donna can save us!
16 months is an eternity in politics. Especially in this City. I mean in December 2002, this guy was saying he owned city hall and that Dick Murphy and Michael Uberuaga had to go through him to get anything done in Council and what happened more than a year later? Please see link above.
This is going to be a hard long slog and we don't know what will happen and those saying who has a lock and who doesn't all have a short term memory. I mean look at Mark Penn and the national political establishment who 16 months before the election were already talking about who Hillary would put in her Cabinet. Last time I checked, this guy won.
Posted by Blue Diegan at 3:37 PM No comments:

VoSD: Dem Mayor to Dem Leader: Who Are You Again?

Lemon Grove Mayor Mary Sessom calls out SDCDP Chair Durfee. The Voice has the story here.
Posted by Anonymous at 2:11 PM No comments:

VoSD: Hell to Pay for Dems Who Endorse GOP

The Voice of San Diego has the story here.

Posted by Anonymous at 6:59 AM No comments:

The Voice of San Diego has the story about Susan Golding refusing to accept responsibility for decisions made under her watch.
Posted by Anonymous at 3:32 PM No comments: