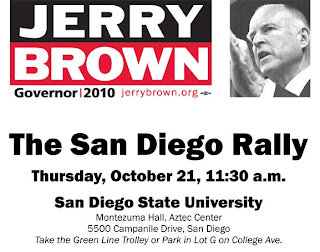 D6: Then
In June, the Lincoln Club stuffed boxes in District 6 with over-sized mail attacks against Wayne and puff pieces promoting Zapf. The local GOP gave Zapf 20K and were able to insert voting guides into Republican ballot statements. Wayne and Hadley were fighting within the Democratic party for support and Tran had won the sign war.

When it was over, Zapf was heading into the runoff with 2nd place Wayne.

D6: Now
The local Dems gave Wayne 17K, both Hadley and Tran have endorsed Wayne and the mailers against Zapf all have a sting. The Lincoln Club is repeating their mail strategy but the Wayne campaign has the edge. The "Don't Get Zapf'd" tag line (Thanks, CityBeat) has a life of its own thanks to the IE mailings about Zapf's record of defaults, hateful remarks, and poor fiscal management.

Honestly, the UT's lukewarm endorsement of Zapf tells you that their decision had more to do with their simplisitc "labor v. business" theme that the UT loves rather than critically looking at the candidates. That would require thought.

Zapf's history of ducking out of debates and her performance at Clairemont using cue cards have confirmed suspicions that she's a lightweight who needs talking points from another politician (Carl DeMaio) in order to speak about anything substantive.

Right now, Wayne is winning the sign war and has been using the new media (Twitter, Facebook, etc.) very well to get their messages out. In fact, on the Wayne website is a release about LAPA endorsing Wayne after endorsing Zapf in the primary. The SDRA also backed away from their Zapf endorsment. We hope these signs point to a Wayne victory in November because the last thing San Diego needs is to get Zapf'd.


D8: Then
In a district that relies on getting voters to the polls, Alvarez and Hueso barely survived to fight another day.

D8: Now
And now they are ready to rumble. Alvarez and Huseo both dropped mean attack mailers on each other this weekend. With the local Dems supporting Alvarez and Labor supporting Hueso, this looks like a wicked match-up. But labor is not unified behind Hueso, such as the Firefighters who are supporting Alvarez, and the Dems are dividing their time between Whitburn and Wayne.

Expect Ben to help out his brother by sharing staff and resources like he did in the primary. As the KUSI post below shows, Felipe seems like a nice enough guy but is miscast as a candidate.

Alvarez can vote on issues facing his district because of he is not conflict-of-interested out and has the community credibility. He is currently winning the sign war but remains to be seen if this campaign can survive a full on labor onslaught.

Really, this shouldn't be happening. Whomever wins is going to be a better vote for labor than the GOP alternative. And heaven knows that Wayne could use the help. But for reasons that seem more emotional than rational, we have a Dem vs. Dem death match.
Posted by Socrates in Love at 9:22 AM 3 comments: