Mark Arabo, the CEO of the Neighborhood Market Association, praised Lorena for her collaboration with small and neighborhood businesses to protect and improve economic conditions in San Diego County.

“Lorena Gonzalez has demonstrated tremendous leadership in forging the partnerships she has with small business owners like those in our association,” Arabo said. “We need Lorena Gonzalez in the State Capitol to help rebuild build that bridge between business and labor to solve the tough issues that affect everyone in California’s economy.”

Posted by Anonymous at 12:53 PM No comments:

The Era of Democratic Conciliation is Over? 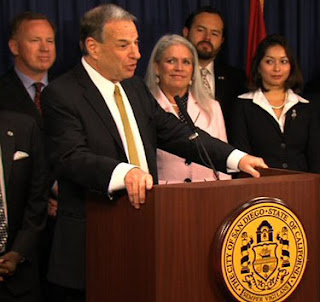 I think I’m ODing on Schadenfreude.

These past few weeks have had me just in awe in the response of the Downtown Powers-that-be over Mayor Bob Filner’s actions in vetoing the Port and the failure to override, especially the U-T’s editorial. I don’t which I love more. The fact that Bob is exercising the power given to him by the strong mayor position that the Powers-that-be backed or the fact that they thought Democrat that would eventually be elected Mayor would be someone that would follow the unwritten rule that you never, ever, mess around with Downtown and the Downtown interests.

That was always the rules if you were Democrat that wanted electoral success in San Diego. You would either kow-tow to the Powers-that-be and be allowed to do some of your pet projects with the knowledge that when the time came you would support them in some project that they needed to build up Downtown or the Convention Center. Then they would support you when you ran for some office either in Washington or Sacramento.

Eventually a Democrat would be elected Mayor so the powers-that-be hopes were that it would be a go-along-get-along Dem that they loved dealing with like a Tony Young or a Todd Gloria. I mean the recent Port vote reeked of the typical go-along-get-along deals that permeated for years in the Council.

But I think the Mayor and some of the City Council have done the math and made the conclusion that with a Democrat being elected in the Fourth District later this year that the Era of Democratic Conciliation is Over and that Democrats must be the voice of those who see San Diego as more than just a Convention Center and an Embarcadero. That there are communities north of Laurel St, east of 16th St and south of Imperial Ave.

And I think this message will resonate as long as the Mayor and some on the Council continue in the strong resolve that they have been showing.

And watching the Powers-that-be flip out is just a huge bonus.

Posted by Blue Diegan at 6:28 PM No comments:

(Sacramento) - Assembly Majority Leader Toni Atkins was appointed by Assembly Speaker John A. Pérez to serve in three key positions on behalf of the State Assembly.  The Assembly Select Committee on Homelessness, which Atkins has chaired for the past two years, was renewed for the current two-year legislative session, with Atkins continuing to serve as its chair.  Atkins will also represent the Assembly on the Ocean Protection Council (OPC), a position she held during the 2010-2012 legislative session.  The OPC is a state body that focuses on protecting California’s ocean and coastal ecosystems.  Atkins was also appointed as one of two Assembly representatives on the California Historic and Cultural Endowment, a program of the California State Library that provides grants to preserve historic artifacts that are important to our state’s cultural legacy.

“In order to preserve California’s unique quality of life, it is important that we look both forward to the future and back to the past.  The Ocean Protection Council and the Historic and Cultural Endowment serve both of those goals,” says Atkins.  “But many of our fellow Californians have no place to live but the streets and cannot share in the golden dream of California.  That is why the work of the Select Committee on Homelessness is so important.  I am honored and grateful to Speaker Pérez for appointing me to leadership positions on these critical bodies.”

More information about these three entities is available at the following websites:
http://www.opc.ca.gov/
http://www.library.ca.gov/grants/cche/
http://asmdc.org/members/a78/issues/itemlist/category/288-the-road-home

Posted by Anonymous at 2:53 PM No comments:

SACRAMENTO, CA) -  Speaker of the Assembly, John A. Pérez (D-Los Angeles) announced today the creation of the Select Committee on Higher Education Issues in San Diego County and appointed Assembly Member Shirley N. Weber (D-San Diego) to serve as Chair. The newly formed committee will focus on identifying concrete ways to improve the quality of and access to higher education in the greater San Diego region.


"I'm looking forward to working with the Speaker, my colleagues in the Legislature, and all those who make up the higher education community to use the Select Committee as a venue to examine and address the various issues plaguing our higher education system," stated Assembly Member Weber.

Assembly Member Weber expressed her interest to establish the Committee shortly after being elected to the California State Assembly in November. In her capacity as Chair, she brings over 40 years of experience as an educator, as well as vital first-hand knowledge of the issues impacting the residents of San Diego.

"The Select Committee will afford us the opportunity to focus on in detail the many important issues impacting higher education such as improving access and affordability. Although the Select Committee will focus primarily on regional issues, we know too well that our issues are similar to those experienced state-wide and may inform or inspire reform through-out all of California," she said.

One issue the Committee will explore specifically is the creation of another college or university in San Diego. Although the County is the third most populated in the state, its residents have few public higher education options. There is actually no four-year college or university in the County south of San Diego State. A new campus would assist thousands of South County residents in attaining a higher education and contribute to the economy in the rapidly growing area, near one of the world’s busiest international borders.

Speaker Pérez will announce the Members of the Select Committee in the coming weeks.


Posted by Anonymous at 2:51 PM No comments:


Assemblymember Weber delivered an exceptional speech and expressed how she is very supportive of the Kliptown Youth Program, which trains and mentors these exceptionally talented rhythm steppers despite the fact they live in a community which lack tap water and extreme poverty.

The Kliptown Youth Program was founded in 2007 in Johannesburg, South Africa to eradicate the poverty of mind, body, and soul.  It also fights against the disadvantages imposed on the
children of Kliptown, which had an unemployment rate of 72 percent in 2005. The program, which has a membership of 400 children, provides educational support and after school activities that focus on tutoring, athletics and the performance arts, including the traditional South African Gumboot Dance. The dancers have traveled from South Africa to many areas around the globe, sharing their talents with spectators to raise funds for the program. The goal of the program is to develop young and dynamic individuals who are willing to participate in these activities to better their community and future.

Gumboot Dance originated in the African mines of Capetown. The miners were not allowed to talk with one another, so they developed a system where they would hit their boots. This soon became more than just a communication system as they started to incorporate dance and step into it. In fact, this form of dance is mimicked today by many sororities and fraternities throughout the country.

The Kliptown Youth Program grew out of a strong belief held by the program’s Director, Thulani Madondo, that a quality after-school program could provide the structure and academic assistance needed outside of school hours by the youth in their challenged township community. In recognition of his work on the program, Mr. Madondo was selected among 45,000 nominees as CNN’s Top-10 Hero of the Year in September 2012.

Posted by Anonymous at 3:44 PM No comments: