It’s never too early to speculate, so let’s cast our runes with an eye on the 2010 Governor’s race:


NEWSOM
The Mayor of San Francisco is not exactly loved but his constituents but too many people find him “hot.” Outside of the Bay Area most Californians associate him with Prop 8 and gay marriage. There is little else in the minds of the public and this gives him a chance to create an identity as the change agent for California. His web presence is innovative and he is a proven fundraiser. He’s young and from a progressive and wealthy bastion but he has never has to run in a race larger than the 232 square miles that make up the city. And at least he has an issue.

VILLAGROSA
The Mayor of Los Angeles is not exactly loved but his constituents but too many people find him “viable.” His Sacramento connections are a double-edged sword. Even though he was Speaker of the Assembly most people do not know what he has done. Unlike Newsom, Villagrosa’s reach is larger, in both geography and population, and, as such, has more hurdles to leap over to make it to the Governorship. There is a reason why electeds coming from San Francisco have historically done better then those out of Los Angeles; LA is too big and you need a larger than life figure to keep it together whereas San Francisco, although more Byzantine in its local politics, is smaller and easier to emerge from. Running a race in LA is not easy and he has done it so he gets nods for being able to manage a large campaign operation. He just needs to get out of the city alive. And figure out a rationale for running.

GARAMENDI
Our Lieutenant Governor is repeating his early 1990s career track making another gubernatorial run inevitable. That time he had a credible youth presence and focused campaign yet he was crushed by the establishment both within and outside the party for Kathleen Brown. Having been yanked out of the way of that cannonball, he rises to run again and has learned, somewhat, from his mistakes. He has been making the rounds with the grassroots fairly consistently and has built up considerable goodwill across the state. It remains to be seen if he can translate this support into a winning campaign. He has mounted a statewide campaign before and did well. So long as he can get over the ghosts of the 1994 campaign, he can be a contender.

ANGELIDES
Oh God no. He’s a great guy, was a kick-ass party chair, and is doing well for himself and good for the cause. But no. His campaign should be seen as a cautionary tale that those who live in the past are doomed to die in the present. His run against Arnold was not going to be easy, but when the campaign runs as if it was 1992, you cannot win. The tactics and efforts of the last Angelides campaign were not as effective in the 21st century as they were in the 20th. No. Angelides can do more for the party and people by not entering this race. For the record, I’m addressing a rumor.

O’CONNELL
In a just world, this man would be our top contender. He’s a great guy, a good leader, and affable enough to be loved by moderate Republicans. But in a universe that gave us W, Arnold, and the 2/3rd vote to pass a budget, all bets are off. This dystopian dimension has rendered his candidacy almost done. Given his competition, he has a slim shot at squeezing through like Davis as the last man standing or the nice guy alternative to the rest, but his signature issue, education, is going to be a tough one for financial reasons to propel him into the finals

BROWN
The thing with Jerry is that his people ooze out from the walls to vote for him. He just has to do say he is running and a campaign will magically appear that will not be very professional but will get bodies to turn out. There are voters who only vote for Jerry. Given the size of baby-boomers as a segment of the population and his name identification, his candidacy automatically becomes real. Republicans love to hate him and his various stints in public office reflect a guy who can win at almost every level. Do not discount him.

THEREFORE:
I think Jerry makes the final and the rest fight over the Obama-change mantle. Newsom is it as it of right now. Villagrosa and Garamendi have not begun full-blown campaigning. Should they, Garamendi could take it if he positions himself as the responsible change agent. Villagrosa needs to make said change happen in LA before he can take it.

WILD CARDS: FEINSTEIN
Event though she has the Intelligence Chair in the US Senate, she is not getting any younger and is thinking of a legacy. Pelosi is the Speaker of the House and the grassroots love Boxer so a final run is not out of the question She could take out Jerry and pummel the rest. Only if is she can be coaxed out into streetfight would she lose.

WILDCARDS: WESLEY
He is close to Obama, was part of the California operation, has money, and would be the de facto change agent if he jumps in. The California Obama operation and frustrated party activists would rally to his candidacy. He could take Jerry and be assured of institutional support lining up behind him.
Posted by Franklin at 7:10 PM 2 comments:

Whats up with the State Chair race?

Greetings, new Democratic blogger here..long time friend, contributor, volunteer and observer of the Democratic Party here, at the local, state and national level...my only purpose is to ask good questions and get us thinking.

One of the most important decisions upcoming is the selection of a new State Democratic Chair. John Burton (of SF and State Senate leadership fame) and Alex Rooker are the two candidates left standing.

What we have accomplished in San Diego has been on our own, with little help from the San Francisco/Walnut Hills axis..why do we want to embrace that now? I realize there is a spike of Burton support here in San Diego, now ...but why, really? Are we hoping for something? Perhaps readers can tag on and answer.
Posted by Dem Politico at 10:04 AM No comments: 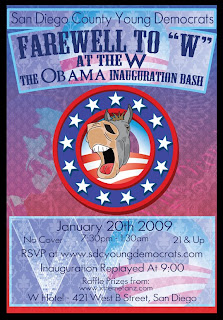 There will be a cash bar and drink specials throughout the night.
Posted by Colin Parent at 11:32 AM 1 comment: