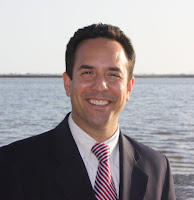 The San Diego and Imperial Counties Labor Council announced last week their endorsement for Humberto Peraza for City Council in Chula Vista for the June 2010 elections.

In their press release, the Labor Council described Humberto as committed to rebuilding Chula Vista’s economy by creating good paying local jobs and by promoting the city as a destination for potential business. Peraza has experience in tackling regional issues for Chula Vista and the South Bay as an aide to federal and local elected officials such as Congressman Bob Filner and San Diego Council President Ben Hueso.

Now let me take a bit of license here to talk about Humberto. I know Humberto. He hired me as an intern for Senator Barbara Boxer’s office when I was a senior in college at UCSD, back in 2002. And now I serve with him on the board of the League of Conservation Voters San Diego.

Besides being a nice guy, a committed progressive, and a policy encyclopedia, Humberto’s one of the rare people in San Diego that looks out for young folks and actively helps to promote them. When I was first starting work after college, he set me up with a political interview, and he wrote me a fine law school letter of recommendation. After I returned back home after NYU Law, he was responsible for getting both me and Patrick Finucane connected with the League of Conservation Voters.

The San Diego area needs leaders like Humberto. We need people who’re team players, and who understand that the success of our region depends not just on one person’s career, but on a community of stakeholders. Chula Vista is the new frontier of progressive politics in San Diego, and I rest comfortably knowing that Humberto is a part of its bright future.
Posted by Colin Parent at 8:35 PM