The event was titled “Farewell to W at the W,” and it was held at the W Hotel, in Downtown San Diego. Over 1500 people attended, making it easily the largest inauguration celebration in San Diego. 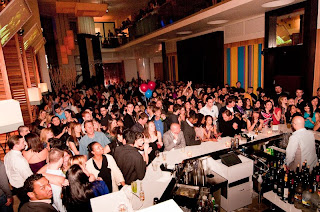 Photos of the event are posted on the Young Democrats Flickr group page. There are hundreds of photos from the night uploaded, and more are on their way. DiscoverSD.com also has some photos up at their gallery.

By any measure, the event was a home run success. Local television aired promotions for the event, both on the ABC and CBS affiliates, as well as a live promotion the morning of the event on Fox.

By having attendees RSVP online, and by heavily promoting the event, the Young Democrats were able to capture contact information of more than 2500 new people for their general distribution list. These new names will be invited to participate in Democratic social events, political actions, and public service opportunities.

Numerous television stations covered the event. Not only were the cameras covering the excitement and celebrations, but numerous Young Democrats were on camera, explaining that Obama’s message of hope had real significance to them. Event organizers kept on message, and explained that change can happen right here in San Diego through participation with the Young Democrats and other progressive political organizations.

The crowed swelled throughout the night, and gathered at 9 p.m. for a replay of President Obama’s inauguration address. Before the video played, organizers introduced the Young Democrats. The young, fashionable crowd shouted and cheered when organizers announced that in November, local Democrats captured six of eight City Council seats.

UPDATE: Shindy.tv produced a 10 minute clip showcasing the event. It's shared here as well. A number of the board members from the Young Democrats are featured, as well as many happy party-goers.

What an amazing event! Way to go Young Democrats!!!