Why I Support Newsom: The Future of the Democratic Party in California 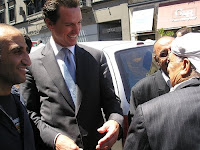 Mayor Newsom is the best candidate in the Democratic Party to transform the enthusiasm for Barack Obama’s presidency, and the drive to overturn Proposition 8, into a lasting political force for progressive politics in California.

I prefer Newsom for governor for a lot of reasons. For the most part, my general view is that Newsom’s imaginative approach to policy will allow him to succeed in solving problems facing California, even where the politics of the past have consistently failed.

But I am also a Democrat. I want candidate, and a governor, who is best able to lead our party as a mechanism for advancing progressive values. Obama’s campaign inspired legions of new people to become interested in politics. And the passage of Proposition 8 has spurned a whole new generation of people to believe in the relevance, and necessity of political action.

The biggest challenge for any new leader of our party will be to channel excitement for Obama, and the drive to repeal Proposition 8, into productive political action for other progressive candidates and causes in California.

Obama inspired a huge number of people to get active in politics. Obama volunteers came out of the woodwork. People who were eager for change, got our there and worked very hard for his campaign. With our state as solid Obama territory, Californians traveled to Nevada, or worked phone banks, calling voters in battleground states.

The enthusiasm for Obama doesn’t necessarily equal an enthusiasm for the rest of the Democrats. Many of Obama’s acolytes are supporters of him, individually, and have no broader allegiance to his party, or his progressive ideology. This is a natural consequence of Obama’s broad, cross-party, and pragmatic appeal. To capitalize on the wave of support for Obama, Democrats will need to present their party as a part of Obama’s overall agenda for change in American politics.

Newsom is the best candidate to present to voters a vision of the Democratic Party in California as a natural extension of Obama’s promise for a new kind of politics. Newsom’s general approach is similar to the President’s. They both promise to try new things, to experiment and utilize the tools of government to improve the lives of the people they represent. They both are careful not to promise the moon, but candidly tell voters that sometimes their innovative plans may falter and even fail. But despite that real world pragmatism, they present a view of government as productive, as progressive. They promise to persevere and continue their creative policy agendas until they get things right.

Both men speak with a kind of hope and imagination that fits their politics. Obama talks about a promise for a better America. Newsom speaks about living up to our best ideals, and advancing a kind of politics for which we can all be proud. Their language is inspiring, their rhetoric soaring. It sends a message that politics isn’t just about the nuts and bolts of policy, and the promises of the campaign trial – it’s also about the aspirations we have for ourselves as a people.

It’s also no small thing that the Newsom’s campaign team has been adopting the internet-based grassroots approach that catapulted Obama past the more established Clinton primary operation. Obama’s candidacy was a revolution in the party. He led a generational insurgency that toppled an organization that had already won, and held the White House for eight successful years. Newsom’s campaign has 30,000 supporters on Facebook, more than any but two political figures in the nation. And he’ll need them to overcome the more established candidates in the field, who have been giants in California politics for decades.

Obama supporters use Facebook, Twitter, and the rest. They’re familiar with the internet as an organizing tool. The youthful energy of the Obama campaign will be most comfortable translating itself into support for other Democratic candidates who are similarly fluent in the modern vernacular of the internet. The celebrity of national politics is a strong attraction for engaging new political interest. But that interest can be channeled to more local concerns, especially when local operations model their themselves after familiar terrain from national campaigns.

Obama wasn’t the only catalyst for political involvement in California in 2008. Proposition 8 drew in unprecedented numbers of people into the political process, including LGBT people, their allies, and those committed to civil rights in all of their forms. To many, the vote to disenfranchise a minority of California’s citizenry is a clear statement that even fundamental rights require our constant vigilance.

With Proposition 8, people didn’t just become interested in politics; politics became a part of their lives. Politics came home, in the most fundamental of ways. The fight to defeat Proposition 8 drew in huge numbers of people. But its passage, and the ratification of discrimination under the law, has jolted people with a new kind of urgency. The civil rights movement isn’t over, and civil rights are not guaranteed to all in this country. Young people especially are responding with a new sense of commitment. “Stonewall 2.0” is fueled with a kind of disciplined political militarism to roll back the repeal of marriage rights.

Newsom is the candidate best positioned to show to voters and activists that the Democratic Party is the party for inclusion and for equal treatment under the law. Other candidates have also done very important things for the cause of equality under the Constitution - fortunately, it’s quickly becoming a shibboleth of progressive and Democratic politics to support marriage quality. But Newsom was there first, and in the most muscular of ways. He had the power to advance equality, and he did it. That kind of “cap over the wall” vigor is a testament to leadership, and it’s the kind of bold action that generates not just good will, but dedicated followers.

Whoever wins the Democratic nomination in 2010 will be the de facto leader of the California Democratic Party. Newsom is the best candidate to incorporate the new activists and voters who were inspired by Obama, and who organized to repeal Proposition 8.

The great Willie Brown basically said all of this in July of 2008. It took me a several hundred words here to make my point, but he did it in 50.

Jerry Brown called the other day. You know that both he and Gavin Newsom are running for governor.

Jerry asked me how Gavin saw the race.

I said Gavin sees it as a replay of Hillary Clinton vs. Barack Obama.

Thanks for your intelligent and thoughtful article! Like Obama, Newsom has the courageous will to break away from the traditional political triangulation. They have decided to place the advancement of the common good above the potential political consequences. They will make "doing the right thing" cool again.