Why I Support Newsom: Civil Rights 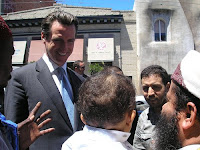 Mayor Gavin Newsom is well-known for ordering San Francisco to issue marriage licenses to same-sex couples. This sort of action was more than just a symbolic short-lived expression in support of equality. It was another example of Newsom’s willingness to use the power of his office, to make headway to solve a problem that had so far seemed unsolvable.

Marriage is a fundamental right in this country, and under our Constitution. But the common wisdom had been that people weren’t ready for same-sex marriage, and that anyway, there were statutes on the books that defined a marriage as between a man and a woman. Newsom didn’t want to be a part of an injustice, and he issued licenses anyway.

This wasn’t a bald refutation of the law. Newsom explained that he had a duty as Mayor to independently interpret the state and federal constitutions, and he understood them to mean what they say – that people must be treated equally under the law, including with regard to marriage. Statutes can’t trump constitutions, and the Mayor was duty bound to uphold the Constitution.

It’s no counterargument that courts, not mayors, ought to be interpreting the Constitution. Courts may have the final say as to the meaning of written laws, but we don’t wait for a court to tell us that U.S. Presidents are sworn in on the 20th of January – we read the Constitution and interpret it for ourselves.

Those who exercise public authority have a responsibility to ensure that they are operating in accordance with the law, the Constitution being the most supreme law of the land. Congress isn’t permitted to pass a law banning freedom of speech, not only because it would be overturned by the courts, but because Congress is required to examine its own authority, in the first instance, to determine whether or not it has the power to enact a law. If the California electorate passed an initiative saying that girls were not permitted to attend public schools, responsible school boards would undoubtedly still admit all comers. They could be confident that the law was unconstitutional, and that they had a superior constitutional duty to provide equal access to education for all students.

From the get-go, Newsom explained that he would recognize a court’s ruling if his actions were overturned. That is certainly what the rule of law requires. But it’s quite another thing to suggest that elected executives should sit on their hands and let an injustice persist, especially one of constitutional proportion.

Sometimes the only way to test a system, to see if it’s really working as it’s supposed to, is to shake it up a little. It’s not an easy thing to draw a line between when elected officials should, or should not defy statutes on the basis of their individual constitutional interpretations. But it’s a sophisticated and necessary view of constitutionalism to believe that all elected officials have an independent responsibility to conform their official acts to the dictates of our Constitution.

Newsom’s actions for marriage equality took guts. He saw something that was unjust, put himself out there, and used the powers of his office to set things right. The future of marriage equality, at least in the short term, is still in doubt. The courts and even the voters may side with Newsom and adopt a view that marriage is something that cannot be taken away from people. But equality under the law is always worthy of a spirited defense. We need leaders who are willing to take a stand for their principles, and voters ought to reward those who make such efforts.
Posted by Colin Parent at 8:25 AM