Why I Support Newsom: Compassion and Pragmatism to Address Urban Homelessness

Up until 2002, San Francisco had a long-standing program of providing direct cash payments to support its homeless population. 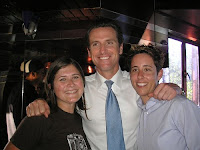 But cash can’t solve this problem. For many people, homelessness is only partially due to poverty. The homeless population struggles with mental disorder, addiction, lack of economic opportunity, and all sorts of other issues. These problems aren’t addressed by cash payments, and where addiction is an issue, cash payments may exacerbate problems. And then there’re the quality of life crimes. Chronic homelessness can result in aggressive panhandling, loitering, street crimes, and all sorts of other unpleasantness. These issues aren’t just unsightly, but they also hurt local businesses, deter tourism, and diminish the tax base.

San Francisco was stuck. The entrenched policy solution wasn’t working, and in some ways, it was hurting both the homeless and the rest of the City. But the voters were compassionate, and didn’t want to cut the homeless off from public assistance. 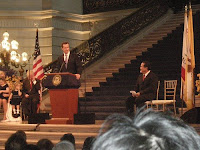 In one of his major initiatives as a Supervisor, Newsom lead an initiative campaign to reform the City’s approach to the homeless, and to provide “Care not Cash.” The idea was simple: dramatically reduce direct payments to the homeless, and use the savings to invest in comprehensive services and more stable housing. The results have meant thousands of homeless moving from a month-to-month government dole to having the shelter and services necessary to lead more dignified lives.

This is exactly the sort of innovative thinking we need for California. We have all manner of entrenched policies, practices and spending. California needs leadership that can look at these problems and see more than the unsolvable. We need someone who can be creative, who can show us how to trade up from what isn’t working, without abandoning our higher ideals.
Posted by Colin Parent at 7:14 AM

Hey what ever happened to the SD Politico Google Calendar? Now that you are the most prolific blogger here Colin I hope will get on that. Maybe I'm the only who ever look at and used but this blog should get it going again.

If you build it, or in this case rebuild it, they will come.

I've got nothin'. Site management is someone else's job here. My job is to write. Maybe you should manage the google calendar!?

it would give me something to do and I would like to help out, if you could out me in touch with the power that be, I would appreciate it.

Who does LOGO support? After all, she is the number one boss lady in San Diego... Will she show up at the Town Hall? Stay tuned..