Why I Support Newsom: Innovative Approach to Health Care

One of the biggest barriers to state and local healthcare reform is a federal statute called ERISA. The statute precludes state or local governments from mandating that employers offer particular benefits, including health care, to their employees. The rationale for this policy was to prevent a patch-work system of local requirements. Without local regulations to worry about, employers would only have to establish a single healthcare program to cover all of their workers nationwide. 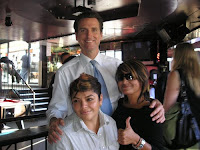 But ERISA doesn’t require employers to provide healthcare, and it preempts states or local governments from doing so. The unfortunate result is stagnation. Localities haven’t served as the laboratories of democracy and haven’t explored new ways of providing health care. In the marketplace, health insurance is given only to those who can demand it. It’s given to the white collar, the skilled workers, and those represented by unions who can bargain on their behalf. The transitory workers, the restaurant employees, and the unorganized have to brave life without health insurance. Local governments have been enfeebled and were prevented from taking meaningful steps to require employers to act responsibly toward their employees.

Instead of throwing up his hands in defeat, and letting ERISA be an excuse for the persistence of uninsured San Francicans, Newsom took a creative approach to the problem. San Francisco couldn’t mandate that employers provide specific types of health insurance, so a new program, Healthy San Francisco, was structured to require employers to pay a “minimum wage” for health care.

The requirements are pretty minor - employers must pay between $1.17 to $1.85 for health care for each employee, for every hour worked. Larger companies have to pay on the higher end of the scale, and small employers are exempt. Most employers that previously provided health insurance already met this minimum expenditure requirement. Those that didn’t spend sufficient amounts for employee health care paid the difference to the City, which used those fees to provide subsidized health care for San Franciscans who didn’t receive health care from their employers. 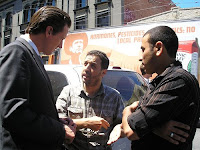 A panel of judges on the Ninth Circuit Court of Appeals upheld Healthy San Francisco against a challenge that argued the health care minimum wage violated ERISA. Healthy San Francisco survived ERISA’s ban on local mandates because, as the court explained, the program was “only concerned with the dollar amount of the payments an employer makes toward the provision of such benefits,” instead of mandating specific types of employer-sponsored health care plans. The court described as series of options for employers to satisfy their obligations including only paying for only preventive care, or providing health care only through an on-site clinic.

It has yet to be decided whether the full Ninth Circuit will review the panel’s decision. And the plaintiffs, the Golden Gate Restaurant Association, has vowed to make an appeal to the U.S. Supreme Court if they are denied again by the Court of Appeals. Healthy San Francisco isn’t a perfect solution. Some employers don’t provide health insurance at levels that a lot of us would consider adequate. But in the context of ERISA, where mandates on employer health benefits are prohibited, there are limited policy options. It was Newsom who was willing to experiment with a new health care policy that creatively fit within those limits.

The City of San Francisco, and all localities, shoulders the costs of its uninsured when people use emergency rooms as their primary health providers. It’s a more efficient use of city resources to provide real health care, instead of only reactionary, emergency care when conditions turn from chronic to catastrophic. Even if the healthcare minimum wage financing program is invalidated by the courts, Healthy San Francisco will not be left by the wayside, and the City will employ other alternatives. “It may set us back,” Newsom has told the New York Times, “but it’s not going to end this program.”
Posted by Colin Parent at 8:15 AM

Has he proposed to/will he propose to do this on a statewide level?

It was Newsom who was willing to experiment with a new health care policy that creatively fit within those limits. https://www.carlmontpharmacy.com