Locally, a lot of people think of the Young Democrats as the group that put on the largest Obama inauguration night in San Diego (cleverly titled “Farewell to W at the W”).

But the Young Democrats are more than just a social club for young progressives. They’re the youth arm of the Democratic Party. That’s the party line, so to speak.

The short and technical definition of the Young Dems are registered Democrats between the ages of 14 and 36, who work to advance progressive values and elect Democratic candidates. Young Dems also like to have a good time. They mix something of a social scene with their political activism.

In San Diego, there are a number of Young Democrat organizations. The most established is the San Diego County Young Democrats (SDCYD). They’re mostly young professionals, folks out of college, or graduate school. But they have some members who are still in school, or who didn’t choose the college route. All of the local Young Democrat clubs are affiliated with the state-wide California Young Democrats, and the nation-wide Young Democrats of America.

When young people ask me how to get involved in politics, or how to start working for campaigns, I tell them to join the Young Dems. It’s an open organization, and anyone with a commitment to progressive Democratic ideals can join. 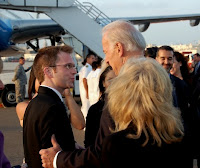 Membership in the Young Democrats has value. Campaigns routinely come to Young Dem meetings courting endorsements to put on their websites and mail pieces. Elected officials come looking for appointees to local boards and commissions. When Vice President Joe Biden was visiting San Diego last month, a group of Young Democrats were invited to meet him at the Coronado Navy Base. Joining the Young Democrats is the easiest way for young folks to inject themselves into the political scene in San Diego.

Young Dem clubs are up and running at the local colleges, and at some of the law schools. Recently, they’ve been popping up at the community colleges and even at a few high schools.

The SDCYD is the largest club in San Diego. They have monthly business meetings, currently held on the fourth Monday of each month at the Gordon Biersch in Mission Valley. Sure there’s beer served, but the business meetings are for business. They’re to plan out community service events and political actions, to endorse candidates, and to collect dues.

Over the last few years, the SDCYD has branched out, adding a monthly rotating social meeting on the second Thursday of each month. Month to month, they move from one swank bar to another. The crowds get bigger every time, and on occasion, someone even sends a professional photographer. Besides the politics, people join the Young Dems to meet people, and to have a little fun.

The real work for the Young Democrats, however, happens on the weekends, between the meetings and the socials. Young Dems plan community service projects, walk precincts, and organize fundraisers all to advance progressive values in the San Diego community.

In 2008, Young Dems organized two fundraisers for Barack Obama's presidential campaign, including one featuring his sister Dr. Maya Soetoro-Ng. The SDCYD hosted two fundraisers for Todd Gloria's successful San Diego City Council campaign. We walked to the homes of thousands of San Diegans to turn out votes for candidates we endorsed. Recently, members of Young Dems organizations hosted a fundraiser for San Francisco Mayor Gavin Newsom, and we took lots of pictures.

This week, the San Diego County Young Democrats are co-hosting their monthly social with the Stonewall Young Democrats. It’s on Thursday, June 11th at 8 p.m. at The Office Bar in North Park. Happy hour prices from 8 to 10. According to the event’s Facebook page, it should be packed.
Posted by Colin Parent at 3:29 PM

I'm glad the young Socialists are coming out. Now that they have their Messiah they can be footloose and fancy free. But wait until the American people wake up to what Barack Hussein Obama is all about and his pro big government Socialist gay loving anti values agenda! Then real American Values will return to the White House and America.

Hannitized, get bent. The fact of the matter is the YDs do both community service and politics which is more than you can say for the YRs.