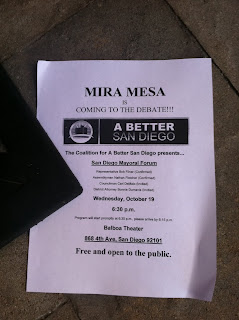 We are a little less than eight months away from the Primary Election for Mayor of San Diego. In typical fashion, most of the electorate is barely aware of the upcoming battle for the future of the site where "happy happens."

Filner
What I find interesting about the SUSA poll is that Filner really has not begin campaigning and starts off with a quarter of those surveyed. Those are nice number to emerge from gate without lifting a finger. That does not mean that Filner can take the race for granted. He has not drawn any serious Democratic opposition and this will allow his campaign time to gear up for the hard slog ahead.

DeMaio
What is also interesting about the SUSA poll is that DeMaio comes in at a quarter and he has been campaigning since he arrived in San Diego. With his signature gathering over and list of supporters/contacts derived from this pension reform/election drive, it remains to be seen if politician DeMaio can actually mount a real citywide campaign. Without his initiatives proving a cushion for his elections and feathering his electoral nest with donors, it is hard to discern how DeMaio's campaign would get beyond this 25%. But with the lists of contacts and donors, his is the only campaign driving the "selfish angry voter who isn't too up on and doesn't care about details" which describes a good chunk of the SD Republican base. Hence the other two Republicans playing "me too." DeMaio is acting quite the politician in staying out of the Fletcher and Dumanis battles to spilt the Reps apart and keep his path to the General election open.

Dumanis
Inertia will only get you so far. Laws of thermodynamics and elections tell us so. With the swatting she received for flipping on the pension, the Dumanis campaign seems to be lying low, quietly collecting endorsements and slowly figuring out Twitter. This would be a fine strategy if it were only she and Filner. It is not and someone should inform the Dumanis campaign that Aesop's fable about the Tortoise and the Hare works if the hubris of the hare causes the hare to stop. As of this writing, neither Fletcher nor DeMaio show any signs of slowing down. She may limp into the next year but I just don't see how Dumanis can secure a spot in the General.

Fletcher
With his Sacramento and local support, Fletcher is still the "Dark Horse" in that he has yet to emerge from the shadows and do something to wake the San Diego electorate to his existence. It would not take much to remind them of what he has done and it is possible that he is holding his fire until 2012. Still, he has to carve a solid base somewhere that won't be attracted to the Filner-DeMaio poles and this task is made easier without Dumanis. As she flails amongst the "moderates" for support, Fletcher can either wait her out or plow forward, on his own which may be a gamble that he'd rather not take at this time.

I recall discussing this race with a friend at Politifest awhile back, and it basically comes down to two questions:

1) Do voters want a conciliator or a partisan fighter? DeMaio and Filner both fall into the partisan fighter mode, whereas Fletcher and Dumanis have more conciliator public personas. Given the state of the economy, and the fact that there are a few hundred people camped out at the Civic Center right now, I'm thinking that they want partisan fighters.

2) Left or Right? If the run-off is Filner v. DeMaio, then we're going to get a stark policy debate.