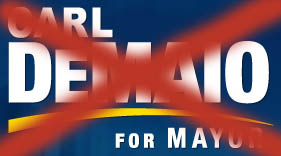 The DeMaio campaign thought it had a nice news piece to kick off the week with their announcement of former SDCDP Chair Art Castañares coming on board as a campaign consultant. This news was somewhat buried by the leaked poll results showing Filner over DeMaio and Filner's offer to Fletcher. Nevertheless, it should be addressed for what it is.

Castañares has been inactive in local Democratic circles for at least a decade. He has been fined by the San Diego City Ethics Commission and has been doing pick up work for Republicans in South Bay. To claim his going over to DeMaio is a quality catch is to miss the point.

If he didn't have the title of "Former San Diego County Democratic Party Chairman" this would not have been story. And this is only a story in the evolving DeMaio fantasy of being a non-partisan candidate.

Castañares can best be seen as a tarnished showpiece rather than anything of relevance to the unfolding campaign. Filner has a solid hold on voters south of Interstate 8 and to think that a single hire that Democrats won't touch can make a difference is lunacy.

Happily, it's DeMaio's money being wasted on this investment which appears to be one that a politician would make rather than a businessman.
Posted by Franklin at 8:41 AM