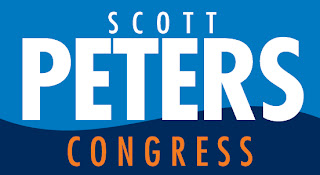 WHAT:
One of San Diego’s most high-profile elected officials will join Peters to announce his endorsement of Scott Peters for Congress.

In the newly drawn 52nd Congressional District, the electorate breaks down 1/3 Republican, 1/3 Democrat and 1/3 Decline to State or independent.  It will not be won by securing the vote of only Democrats or only Republicans.

*** This very important endorsement will demonstrate the across-the-board appeal and support Peters has in his campaign to unseat long-term incumbent Brian Bilbray. It will be a tremendous boost to the Peters campaign.