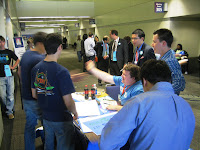 Local Young Democrats made big contributions to this year’s convention. Locals Jonathan Goetz and Allan Acevedo were elected to positions on the California Young Democrats board. The San Diego County Young Democrats club received the “Outstanding Project” award from CYD for their “Farewell to W at the W” inauguration night celebration. That event attracted more than 1500 revelers and is largely responsible for the recent explosion of Young Dems membership in San Diego.

Despite the unity and pride Democrats feel for electing Obama to the White House, this convention was starkly divided on a number of issues. Delegates bucked their legislative leaders and voted to stay neutral on about half of the upcoming May 19th special election provisions, including Prop. 1A, and voted to support the other half, including Prop. 1B. Party rules require 60% to endorse ballot initiatives, and only half of the propositions could muster that kind of support. 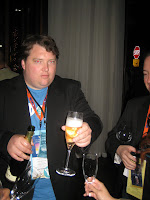 The state-wide California Young Democrats had a fierce leadership fight, with Sacramento’s Alissa Ko being elected as President over Los Angeles area David Phelps. The San Diego area Young Democrat chapters, including those from UCSD and SDSU, largely supported Ko.

The convention also served as an early battleground between the gubernatorial ambitions of Attorney General Jerry Brown and San Francisco Mayor Gavin Newsom. Both gave speeches to the assembled delegates, and were ubiquitous faces in the hallways and hospitality suites. They smiled and shook hands with potential supporters from around the state.

The most stark contrast between their campaigns, as has been described elsewhere, was their different approaches to parties for the Party. At these conventions, candidates routinely throw parties for conventioneers, and the higher the office, the more elaborate the soirée. Brown offered a tame afternoon “Recession Reception,” at the historic Governor’s Mansion. Some 800 people attended, though I wasn’t one of them. We did a drive-by, but the line was too long, to his credit. 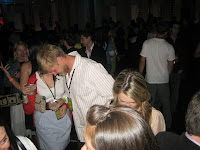 Newsom hosted a nighttime block party at a fenced in area in downtown Sacramento. While Brown’s party featured his 1974 Plymouth, Newsom hosted a concert with Wyclef Jean, and a near endorsement by former NBA star and current Sacramento Mayor Kevin Johnson who referred to Newsom as the “next Governor of California”. About 3000 people attended the concert, and subsequent after-party at the swank Lounge on 20.

The two campaigns presented clear and different versions of themselves. Brown was the experienced, steady former governor. Newsom was the exciting fresh face of the future.

What about likely gubernatorial candidate Mayor Antonio Villaraigosa? He stayed in L.A. With Newsom presenting himself as the forward looking New Democrat, and Brown posturing as a stark contrast, it didn’t leave Villaraigosa much room to distinguish himself to delegates. Though one wonders: if Villaraigosa can’t come up with a compelling narrative for a few thousand conventioneers, what can he say to inspire the millions of primary voters?

[Cross-Posted on NBC San Diego.]
Posted by Colin Parent at 8:54 AM