Just when I thought I was Out, they pull me back in.

I was enjoying a nice sabbatical away from South Bay Politics. As a political geek living in the South Bay, it's very easy to lose sight of the simple pleasures in life because they is so much intrigue and turmoil. So much that it would make a great pulp political fiction novel. (I'm working on the draft so you can't have the idea!) Anyway so I was trying mightily to not get involved in the fights and let others comment on what's been going on with the Sweetwater Board, the City of Chula Vista races, the new 79th Assembly race, the San Diego Mayor's race, and the 51st Congressional. But with the latest stuff that has been flying around I felt compelled to post again and talk about the latest in South Bay politics. Hence the clip above... As we've seen in the past few days a lot has been happening so I'll start with the 51st Congressional District and maybe tomorrow on Chula Vista 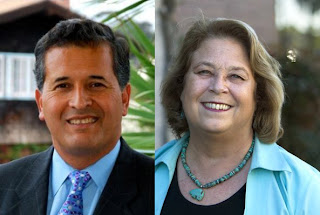 As I stated in my last post so many months ago, anyone who has any knowledge of these two and the South Bay knows that this race was going to be big and these months have shown that to be the case. While Vargas has been fundraising at a good clip, got the State Party endorsement and California Labor Fed you would think he has this locked in and Ducheny should have gotten the hint and just let go.

Yet that hasn't been the case.

In fact, within the last few weeks with the Channel 10 poll and missteps by Vargas, like this, this and this. It has shown that this is not a cake walk and Juan's biggest hurdle is himself. Why do I say that?

Well, Juan has never been the favorite of Left-Center Democrats. Whether it was running against Bob Filner for Congress two times or voting against traditionally Democratic issues like health care reform, reproductive choice or consumer protection in the banking and insurance companies. He has either voted against or abstained against bills when he was in the Assembly and again in the Senate.

Of course when he was trying to court Democratic Party activists from late 2011 to early 2012, he was trying portray himself as a true blue Democrat that would fight for Democratic values but once he got what he wanted... The old Paco came back, true to his pro-business, anti-choice and pro-corporate banks soul.

Now the other thing has been his high name ID and very early in the campaign he was touting that he had the highest name ID and was trouncing Ducheny. Which is true, considering that he was just in a campaign in 2010 against Mary Salas but that name ID is a double-edged sword. Why? Because according to the SurveyUSA poll showed that almost half of the people who have heard of him don't like him.

The other thing is that people forget that Juan only beat Mary Salas in 2010 by only 22 votes. Considering that Mary did not exactly run a text book campaign and missed a lot of opportunities to really fight back against Juan shows that even with all breaks he got from his opponent he still only barely won.

So is Ducheny any better?

To start, Denise hasn't been the best on progressive issues either like gun control, helmet laws and labor issues. Also the fact that her fundraising has slowed down would have any armchair pundit be wary of her chances.

That being said, she does have a shot at beating Juan.

But her real strength is that any type of negative attack that Juan give would boomerang back to him and his negatives. For example if he attacks her from the left about gun control, she would respond about his wavering on health care reform. If he attacks her on the right on choice, she could respond about his attacks on personal liberty. Also Juan can't run as an outsider pushing reform because he's in Sacramento right now and last time I checked the approval ratings for the legislature ain't that great.

As for the rest?

Well miracles can happen...
Posted by Blue Diegan at 7:16 PM

If we want a no nonsense, honest, hard working representative in Congress, we need to vote Denise Moreno Ducheny. Mr. Vargas? No thank you.