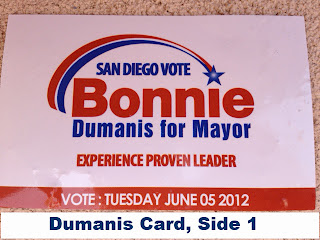 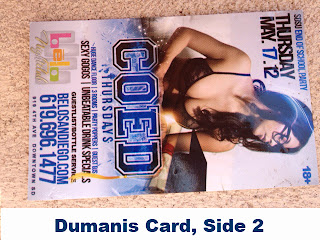 The cards above have been found littering downtown this weekend.


Dumanis is still in the race and, although she shows no sign of winning, shows that she can still make an impact through taking votes away from Filner.

Downtown is an interesting place where Democratic residents seem to believe that Bonnie is “a Democrat at heart” and it is OK to support her. This line is an old one and her actions have spoken louder than her heart. However, Filner hasn’t done much to defend his brand beyond the deepest blue parts of the city.

What Filner does have in his favor is that most voters know where he is coming from. Dumanis has never recovered from her hesitancy in supporting Proposition B among Republicans and most voters still don’t know anything about her, illegal sign postings notwithstanding. This is why she can still do her party a favor and take votes from Filner the longer she stays in the race. They are few in number but they have the potential to swing this election. And Dumanis is all about moving up the ladder.

This is how you know that DeMaio must be terrified even though he is a solid for coming in first in June. His career (only in San Diego would it even have been possible) has been guided by the star that is the Mayor’s office. To have that crowning achievement stolen by a former Republican is heresy and must be dealt with by any means necessary. Because when you base your reality on ignoring key facts of existence the only solutions that make sense are the fantastic. DeMaio going after Fletcher from the left is batty on the face it but may gain traction from most of our citizens caring more about American Idol than the upcoming election.

What Demaio needs is Filner face-off. This scenario allows DeMaio to fight a classic Left-Right battle with an electorate that tilts his way and an opponent who may not have the resources to pull off what should be a moderately easy win. The “Downtown establishment” would suck it up and go with DeMaio and many of the larger political names may grudgingly go with Filner for fear of a DeMaio victory. Demaio taking Filner down would establish him as the new rising star for Republicans nationally. Were DeMaio to lose to Filner, he could shift blame to the national climate (assuming Obama wins), the registration numbers (San Diego is Democratic in registration), Labor (why not) or anything else and still have a place in the local political establishment.

If DeMaio draws Fletcher then he is in for the fight of his life. Democrats who have been lukewarm behind Filner would go rabid for Fletcher; he fits the Kenndy-esque image Democrats have been conditioned to fall in line after. What ever is left of Dumanis and Filner operations would line up against DeMaio. Under this scenario, it is difficult to see Fletcher losing. Were DeMaio to lose to Fletcher, his career in San Diego would be over because this loss would cut deep into the Republican Party base and his cult of followers. I predict he would have to move to Arizona and rebuild there because I don’t know how he would recover locally.

But Fletcher, like Dumanis, suffers from political inconsistencies and reputation for backroom dealing. This is what makes attacks on the both of them from a policy standpoint effective. DeMaio and Filner are known politically and you would have some idea of what direction they would like to steer the municipal ship.  Dumanis wants to stay put and Fletcher wants to stay the course; neither of which seem wise as the storm clouds of economic uncertainty gather.

We’re entering a critical time for campaigns. With two weeks remaining, this is when campaigns break from the pack or get broken in the process. Get your popcorn out. This promises to be a game-changer.