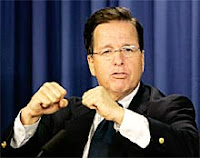 When City Attorney Mike Aguirre failed to get the San Diego County Democratic Party early incumbent endorsement last month, many of local Democratic activists were surprised by the result. Among grassroots activists, Aguirre is viewed as something of a mythic figure, akin to the status enjoyed by councilmember Donna Fyre circa 2004 & 2005. Aguirre’s appeal among these Democratic activist is understandable, he is their Jesus, turning over the tables of “downtown establishment” moneychangers outside the temple of city hall.

Mike Aguirre plays the martyr role quite well to his audience of supporters. These supporters attraction to Aguirre comes out of sense of frustration. Since Pete Wilson was elected mayor in 1971, the voters of San Diego have elected only one Democrat as mayor in the intervening 35+ years and she left office in 1992. Unless something dramatically changes between now and the close on the filing period next March, the drought at holding the mayor office will continue at least until 2012.

Notwithstanding, Mike Aguirre creates a bit of a dilemma for the county Democratic Party. He is after all the only Democratic office holder elected citywide. He has, however, alienated certain sectors of the Democratic coalition, in particular labor. But that is not his only the problem. His disconcerting forays as City Attorney into areas not traditional part of the office’s purview, such as his investigation of KPBS, have added to the loose-cannon caricature portrayed in the pages of the local establishment paper. Many people in this town who consider themselves staunch Democrats, but are not activist types, they find Aguirre’s tenure as City Attorney embarrassing.

Last week, when Democratic Party Chair, Jess Durfee was guest posting at Voice of San Diego it was interesting to read the comments to his posts. Most of the comments, once you got past the token Republicans, didn’t want to discuss what Jess Durfee was posting about. Instead many of the comments were from Democrats wanting to comment on Mike Aguirre and if the party should endorse him. The vast majority of these comments, expressed the opinion that Aguirre doesn’t deserve the local party’s endorsement. Of course, there is no way to tell how representative, these commenters are to the public at large. That being the case, since the vote last month, I have heard from a friend who is Central Committee member that Mike Aguirre and some of his staff have been meeting with members of the Central Committee to make their case for endorsement. My friend also tells me that he thinks, the early endorsement will be put back on the agenda for the January Central Committee meeting.

There is no doubt that the downtown Republican establishment is gunning after Mike Aguirre. All you need to do, is just pickup a copy of the UT to see their slanted coverage. Does that warrant the local party to throw its prestige and weight behind Aguirre’s reelection? To the grassroots activists the answer is “yes.” He is, however, not the only announced Democrat who is seeking the office of City Attorney. Since the party has once already denied him the early incumbent endorsement, maybe they should hold off the endorsement until all announced Democrats for City Attorney can present themselves before the Central Committee to be considered for endorsement. -TQ
Posted by Tyler Quinn at 4:39 PM

If the grassroots see Mike as their messiah, then they deserve to be played for suckers. San Diego needs better than this, but maybe they deserve it.

Look at it this way; the more time Aguirre spends trying to court votes for a worthless endorsement is less time he can spend destroying San diego.

I was impressed with the latest entry into the fray. I would like to learn more about her. She seems like a refreshing antidote to Mr. Aguirre, and she seems sane. Any chance of a more detailed blog on her?